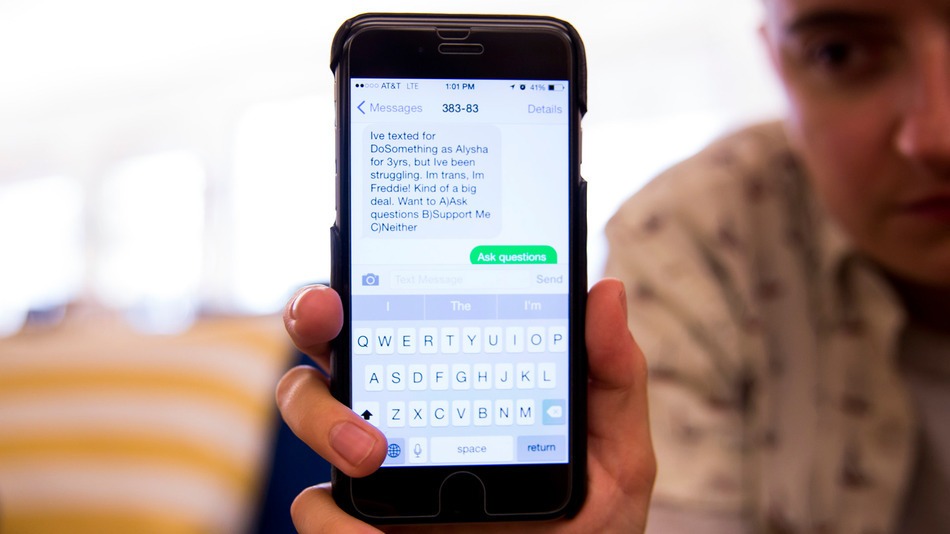 Coming out as LGBT to friends and family is a huge step, and often a nerve-wracking experience. But imagine how daunting it would be to come out to more than 2 million people — via text.

That's exactly what Freddie Bologno did Thursday morning. As DoSomething.org's mobile engagement manager, Bologno — who uses the gender-neutral pronouns "they," "them" and "their" — is used to sending texts to many people. That's their job: engaging youth on social issues via SMS messages.

When texting the organization's 2.4 million-strong mobile audience about campaigns and good causes for more than three years, signing off messages with "Alysha," Bologno has always had a rule of being honest — showing that it isn't just a brand texting, but rather a real person. Now, they're using the platform to show that person identifies as transgender.

"There was that option of, 'Okay, do we just say Alysha has left, and Freddie's taking over now?'" Bologno, 27, told Mashable. "But that feels gross. I'm not a television character that gets killed off. I'm a real person. So, to hold true to that best practice we have of being authentic and honest, the only option was to send this text today."

Sent at around 10:40 a.m. ET, the text read, "Ive texted for DoSomething for 3yrs as Alysha, but Ive been struggling. Im Trans. Im Freddie! Kind of a big deal."

The message then prompted users to choose among three options: ask a question, support Bologno by tweeting a celebration song with the hashtag #Ready4Freddie or neither.

I have Katrina and The Waves's Walking on Sunshine blasting VERY loud right now in support of @classicfreddie !! xoxo #Ready4Freddie

"I've just been blown away by how positive the responses have been," Bologno said. "That's so amazing to see. I have so much faith in this generation."

The most common question they've received is, ''When did you know you were trans?"

"Which is always such a hard question, right? [As if] I woke up one day and was like, 'Yes, I am trans.' It was definitely a long process for me. I think it's something I've known for a really long time, maybe my whole life, but it's something I've suppressed, or maybe didn't even really understand," Bologno said.

But after a year of self-reflection, and coming out to friends and family in April and then the DoSomething.org staff in May, Bologno felt it was time to inform the people they've been texting with for so long.

Other responses Bologno received included thank-you texts from trans youth, praising them for furthering the visibility of transgender people and the unique issues they face, such as the disproportionate violence against trans women.

"We've also been getting a lot of people asking about gender fluidity. It's great to be able to text them back and say, 'Yeah, I actually identify as a non-binary trans person, so not really relating to male or female,'" they said.

Bologno's text message Thursday is especially poignant this year, after celebrities such as Caitlyn Jenner publicly announced her transition, and singer Miley Cyrus sparked a wider conversation about gender fluidity.

But Bologno said it's important to note that all trans stories are different.

"Mine isn't the only trans story. Caitlyn Jenner doesn't have the only trans story … [Working at DoSomething.org] enables me to send this text to 2.4 million people, to have this voice and get my story out there. Not every trans person has that fortune. It's still really unsafe for a lot of people to come out at their jobs, let alone even be employed at a job because of discrimination," they said.

Opening up a dialogue via text affords anyone the anonymity they might need to feel comfortable asking questions, especially those who are struggling with or are confused about their own gender identities, Bologno added.

"You don't have to have this fear of judgment from somebody else seeing you ask a question," they said. "You can be open to ask anything."

Bologno is answering questions until 6 p.m. ET on Thursday. You can sign up for future texts from DoSomething.org, here.