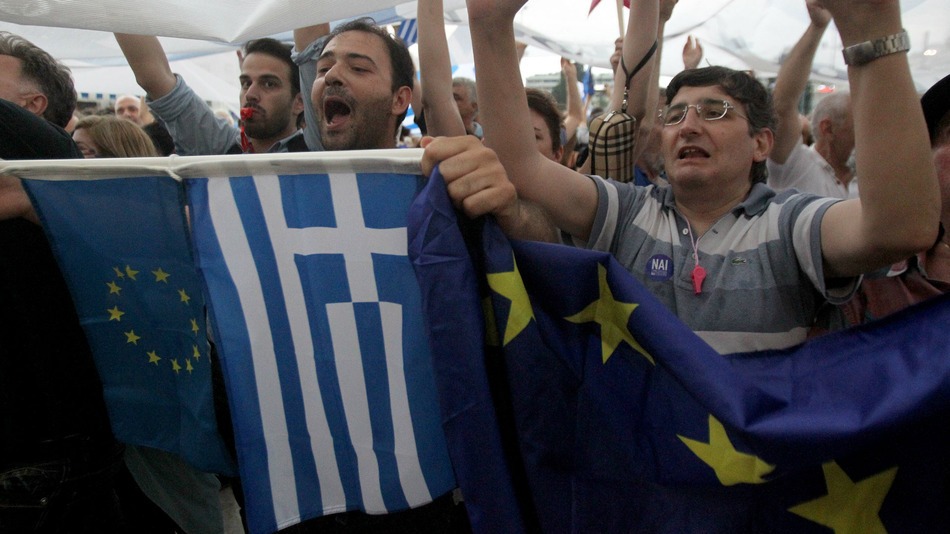 Thousands of Greeks take part in a rally to urge voters to say “Yes” in the July 5 referendum in Athens, Greece, on June 30, 2015.

The situation in Greece might seem very complex, but it’s actually pretty simple: Greece owes a lot of money that it doesn’t have, and it is being pressured to agree to terms it doesn’t like in order to get the money it needs. It’s not unlike your parents requiring you to clean your room in order to get your allowance.

For years now, Greece has been forced to undergo severe cuts to its budgets and programs — commonly known as austerity — in return for money to help pay down its debts. Austerity hasn’t worked, economists agree, and so do the current leaders of Greece, who believe that spending cuts have fueled a 27% unemployment rate and hammered Greece’s economy.

See also: The most important quotes from Greece’s meltdown

D-Day, for the entire crisis, is Sunday, July 5th. Greece’s Prime Minister Alexis Tsipras scheduled a popular vote for that day that will determine whether Greece accepts more austerity measures from the EU. Tsipras has been pushing for a “no” vote through speeches and rants on Twitter, while thousands in Athens have rallied for a “yes” vote in fear that Greece may be forced to leave the euro. The other major fear is that Greece may be unable to pay its debt to banks — what’s called a default — and because Greece is already in arrears to the International Monetary Fund, that possibility of moving towards default and bankruptcy looms ever closer.

Here we answer the major questions about Greece’s near future. To catch up, read our explainer on the entire situation and this guide to the major players.

And remember: things are likely to change fast.

I keep hearing about “sovereign debt.” What is that?

Sovereigns are just countries, so sovereign debt is the debt that countries owe. Countries borrow billions of dollars to finance their day-to-day and year-to-year activities, including everything from building roads to fighting wars. To raise money, companies sell bonds, which are IOUs — anyone who buys a country bond gets the promise that the country will pay him back, with interest, at some point in the future.

Sovereign debt is often considered some of the lowest-risk debt to own for developed nations, which tend to be pretty good at managing their money. The U.S., for instance, has some of the highest-rated bonds in the world because a default of the U.S. government is considered unthinkable. (Even though America could never technically pay back every cent it owes, because it has to use that borrowed money to keep functioning.)

That’s why it would be shocking if Greece could not pay its debt, which is currently at about $360 billion. Developed nations rarely get into that position, and Greece would be not only the first but also the largest.

So what is a default?

A default occurs when a country can’t pay its debt. Just like if you were not to pay your credit card for months and months, you would eventually be in default. When it comes to countries, however, default is very specifically defined: it only happens when they can’t pay back their bonds, which are usually held by banks, hedge funds, and other financial institutions. The IMF doesn’t count!

So how big would a Greek default be?

If Greece officially defaults on its entire $360 billion in debt, it will be the biggest ever.

But wait, didn’t they miss payments already to the International Monetary Fund?

Yup! Greece was supposed to pay the IMF but didn’t have any money and didn’t reach a deal to borrow more. The missed payment of $1.7 billion is the biggest in the history of the fund.

Some people are already calling that a default. However, because the IMF is essentially an agency and not a commercial borrower, they technically call a missed payment “arrears” not “default.” There are a few reasons for this: one is to reduce panic, because the word “default” tends to indicate a financial meltdown that could cause people to start pulling their money out of banks; and the other reason is that the IMF doesn’t give extensions for payments because debtors still don’t pay — so “arrears” is a polite way of saying a country has missed a deadline. It’s a small distinction, but important in this case.

Then Greece has not yet defaulted? It can still pay its bonds?

Right, Greece has not defaulted. And theoretically it can pay its bonds, but it doesn’t have the money to do that, since it can’t even fork over $1.8 billion to pay the IMF. Greece is facing a number of big bond payments in August. To pay them, it will need another bailout from the European Union.

So why doesn’t Greece just pay up?

Because it is literally broke.

The government barely has any money. It has been relying on loans from financial institutions, and even tapped a special IMF holding in May, to pay back its debts.

Even its banks have been supported with emergency cash from the European Central Bank in the form of “emergency liquidity assistance” but that is coming to an end soon as well. The ECB recently said it would not make any more emergency loans to Greek banks.

Meanwhile, Greeks are rushing to get their money out of the banks while they still have some to give.

Nobody is quite sure what happens if Greece begins missing debt payments and officially goes into default.

Just missing the IMF payment may have already set Greece on that path, according to Diego Iscaro, senior economist for IHS Global Insight in an analysis published on Wednesday.

“The missed payment to the IMF is a historic moment and takes the Greek economy into uncharted waters,” Iscaro wrote.

What we do know is that it won’t be good. If banks and hedge funds can’t get their money from Greece, they tend to panic and close off lending to everyone else — consumers, companies, and anywhere else they can plug holes and cut their losses.

Iscaro reasons that it may be too late for Greece, and that the dominoes are already falling that would result in Greece abandoning the euro as its currency. Analysts have reasoned that if Greece and its banks run out of money, the government will need to make a new currency.

Is there any precedent for this?

There is no precedent for leaving the Euro, which has surprised everyone by managing to stay together since its introduction in 2002.

There is, however, precedent for countries that default on their loans.

Sudan, Somalia and Zimbabwe have also failed to repay the IMF, although not quite in the amount that Greece missed.

Greece joins the ranks of Sudan and Zimbabwe after failing to repay ≈ $1.7 bln to the IMF. pic.twitter.com/ffC0iigoEt

As for sovereign defaults, Argentina defaulted on $93 billion in debt in 2001. It was at the time the biggest default in history. And like in Greece, there was some question about converting to an entirely different currency.

Default isn’t a good thing, but sometimes it’s necessary. After Argentina defaulted, it suffered an 11% decline in GDP, and poverty rose sharply. But, as economist Joseph Stiglitz recently pointed out, Greece might just need to undergo an Argentina-like default to get back to a place where it can have sustainable debt and begin rebuilding its economy.

Sunday will be the referendum vote (unless it is canceled, something Tsipras has denied will happen).

After that, Greece will have a variety of upcoming payments that it won’t be able to make. On July 13, Greece is supposed to make a $515 million payment to to the IMF. Greece’s total money owed to the IMF right now is around $23.4 billion.

Then, Greece is due to make interest payments on July 19 and 20 of around $335 million, along with a $3.9 billion bond payment due to the European Central Bank. In August, the country will have about $6.2 billion in payments due, according to the Wall Street Journal.

Have any other questions? Add them in the comments below and we’ll answer them in our next updates.