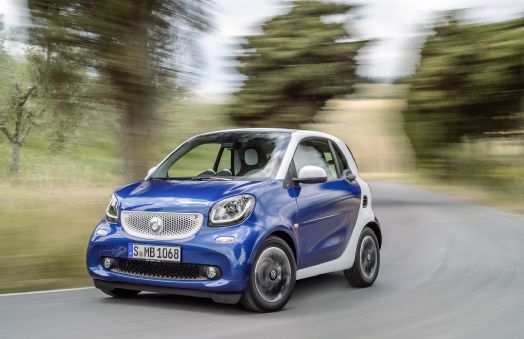 Five years ago, Mercedes was about to order the shut-down of its Smart micro-car unit. The little two-seater had been in production since 1998, but it kept hemorrhaging money. Yet quite apart from the costs of a shut-down — both in worker, dealer and customer compensation, and in corporate pride — there was another factor in Smart’s favor. Senior management, all the way up to Dieter Zetsche, believed that this tiny urban car was an idea whose time would come. It just needed a partner to help finance the development of the next-generation car, and to get some scale economies.

“If we got no partner, it’s likely there would have been no new Smart,” Zetsche told Motor Trend last month. Fortunately, Daimler had begun to talk to the Renault-Nissan alliance, and in 2010 announced cooperation on a number of projects, including a city van, a small four-cylinder engine, and a car that would replace both the Smart and Renault’s smallest.

Today, Smart CEO Annette Winkler is giving Motor Trend a ride around Stuttgart, Germany, in the new Smart Fortwo. She acknowledges there was a crisis at Smart that only a cooperation could solve, although she wasn’t CEO at the time. She was moved from a senior Mercedes sales and marketing job to run Smart in 2010, just after the Renault agreement had been signed by Zetsche and Renault-Nissan’s Carlos Ghosn.

More on Automobilemag.com:This Smart ForTwo is Packed with 5,720 Watts of JBL Sound

“Truly, a co-operation is needed in this segment. Renault was and is the right partner, because we needed one who wanted the rear engine,” she said. “Without that, it’s not a Smart. Also we wanted a four-seater version, and Renault was going in that direction. And we have been able to cooperate well. Our culture is to be open, and we’re French-minded – our factory is in France, many leaders at Smart speak French. Both we and Renault wanted to safeguard our own brands, so we each use nearly all specific see-and-touch parts.”

The partnership will spawn three cars at first: the two-seat Smart Fortwo, which will go to the US. Then a stretched version of the same rear-engined platform, making a Smart Forfour and the Renault Twingo. Those four-door cars will not be exported here.

Winkler doesn’t dispute that Smart faced an existential crisis. The first cars went on sale in 1998, and sales held steady at 100,000 a year, 1.6 million in 16 years. That’s too little for a stand-alone car with a low price. Winkler acknowledges Smart lost big money for its first decade. “But we made a small positive contribution in the past few years,” she hastily adds. “We made no lifecycle enhancements in the past four years yet sales kept stable. That’s proof we’re not just another car. China now has a big desire for high-spec Smarts, and we won share in the [depressed] European market.”

“In 2010 it was decided to continue with Smart. Daimler knew the market for a metropolitan car would grow. I loved the brand, and wanted to make it work.” Indeed she’s known among Daimler staffers for her unbridled passion for everything Smart. Like anyone with such a passion, she assumes it’s widely shared. As we drive around Stuttgart, a where previous-gen Smarts are as common as pretzels, she waves energetically to all their drivers, expecting them to be consumed by curiosity for the new model. Some are, most less so.

Smart has always posited some now-fashionable ideas very early. It was one of the first truly city-specific cars, a two-seater for reasons other than being sporting. It was full of innovations to make a tiny car safe. It had a multi-material body with plastic skin panels, and offered a vast color palette with two-tone exteriors years before customization became an industry buzzword. It was one of the first to allow integration of PDAs, then smartphones. In Germany, Smart has long offered urban mobility solutions including car-sharing and big-car rental. And the electric version was the first EV on sale in Europe.

I put it to Winkler that the fact that sales are stuck at 100,000 means this might not yet be an idea whose time has come. She quotes utopian philosopher Ernst Bloch: “‘A big leap needs a big run-up.’ No one doubts the world needs this [sort of car] now. No one is laughing any more. Everywhere you go, car companies talk of urban mobility.”

As we drive around, she points at tiny parking gaps where the Smart can fit but no other car can. Her eyes scan around for a narrow side street. In we go, She winds the steering wheel, her voice rising to fever pitch as we pull a quick 180. “See, see. See how useful that is.” The turning circle is indeed unfeasibly small, made possible by the rear engine as well as the tiny wheelbase. The curbs need be just less than 23 feet apart – barely more than the overall length of a quad-cab pickup.

“Can you feel the smoother ride?” Yes, it’s a far bit more comfortable than before, thanks in part to front suspension taken from the previous C-class. There’a also markedly more shoulder room, thanks to a four-inch width increase. And there’s none of the unavoidable head-rocking that came with the old AMT. She’s actually driving a manual here, which is a new alternative with this generation. The other new available transmission is, at last, a DCT.

She swipes the dashboard screen through some of its connected apps. In one, the community of Smart owners can crowdsource those semi-official tiny parking space, uploading locations and photos. There are apps for discounted parking, places that do cheaper car washes for these little cars, Smart-relevant events, and so on. Does Smart intend to use connectivity features as a revenue stream? “It’s absolutely not our objective to capture customer data. It’s just that a car this small has advantages and we are empowering the car.”

The only model to go on sale in the US will be the Fortwo, with the DCT. “For the US an auto is a must,” she says. Why not sell the Forfour too? “The Fortwo and Forfour would in effect be in the same segment in the US so would cannibalize each other. We haven’t actually decided to not offer the Forfour there, just not now.”