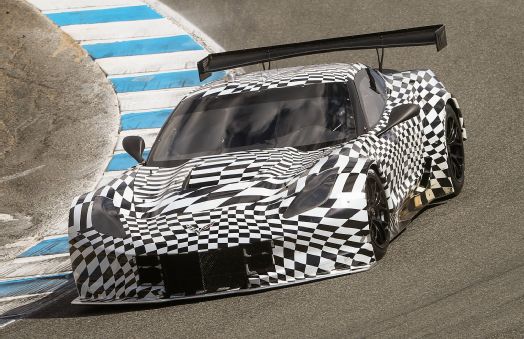 More on Motortrend.com:TOTD: What Is Your Favorite American Car?

Based on the new 2014 Chevy Corvette Stingray, the C7.R features a much wider body with massive fender flares. Standout features also included a huge rear diffuser on the bottom mirrored by an equally giant wing up top. In person, it looks absolutely menacing. We believe the car continues to use the 5.5-liter pushrod V-8 of the outgoing C6.R racecar, which has been hugely successful. It certainly sounds as mean as the C6.R. Neither Chevrolet or Pratt & Miller, the shop behind the factory sponsored Corvette Racing team, are releasing any more information at this time.

The C7.R will takeover from the C6.R in both the American Le Mans Series and internationally. The finished, non-camouflaged car will make its racing debut at the Rolex 24 At Daytona next January and we look forward to watching it attempt to claim another class win at the 24 Hours of Le Mans next summer.