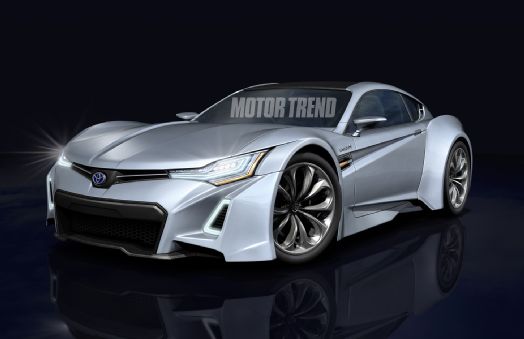 When BMW and Toyota announced their intention earlier this year to produce a jointly developed, midsize sports car, it took some industry watchers by surprise. You can certainly argue Toyota needs help building up its performance portfolio, but you can’t say the same for the gang from Munich, which already has a garage full of Ultimate Driving Machines.

It all starts to make sense when you look closer at the budding BMW-Toyota tie-up, which began in late 2011. It’s the sort of mutually beneficial relationship that is starting to become more commonplace in the industry.

“Toyota is strong in environment-friendly hybrids and fuel cells… I believe BMW’s strength is developing sports cars,” said Toyota boss Akio Toyoda in January. “I get so excited thinking about the cars that will result from this relationship.” So do we, Toyoda-san, so do we.

So while jointly developed diesels, fuel cells, and the latest lithium battery and hybrid tech likely are more exciting from a corporate perspective, enthusiasts are salivating about the sports car. Looking at the existing Toyota-BMW lineups, an upscale sports coupe makes the most sense. It could possibly signal the return of the Supra and fill yet another niche in the BMW portfolio as a stand-alone coupe different in mission and positioning than the Z4 or the soon-to-arrive 4 Series and i8 plug-in hybrid sports car.

A source close to Toyota tells us that by the time of the official announcement in January, the two companies had already conducted feasibility studies and development was well underway.

More on Automotive.com: BMW Upgrades 2014 Z4 and X1 with Interior and Color Changes

“When BMW announced in December 2011 that it would supply a new clean diesel engine to Toyota, the jointly developed sports car project had already begun,” says our insider. The person who green-lighted this project? You guessed it: Toyoda, the same exec responsible for green-lighting the Lexus LFA and Toyota GT86/Scion FR-S. The man loves his sports cars.

We also hear the engineer charged with spearheading this new coupe is none other than GT86/FR-S chief engineer Tetsuya Tada. According to our sources, Tada has already visited BMW multiple times in the past year or so. He said in a March interview on Toyota’s official U.K. blog that he was planning to head to Munich after the 2013 Geneva Motor Show to sit down with BMW execs over some beer and bratwurst.

“I am hoping for a synergy effect with BMW that will result in a product that none of us could have imagined; something more than anyone expects. I would like that to be something like a sports car,” Tada said in the interview. “I would even go so far as to say that for the collaboration to work we have to bring a product which exceeds all these expectations.”

We don’t expect the BMW-Toyota sports car to use the 2.0-liter flat-four found in the GT86/FR-S (and their Subaru BRZ sibling). A BMW I-4 engine is more likely (though a Toyota-sourced I-4 is possible) and would necessitate significant modifications to the GT86/FR-S platform expected to underpin the car — a task that would fall to BMW. The platform would also likely have to be stretched to bring it into the midsize category. There’s an outside chance a BMW platform is being used, but given Tada’s extensive involvement in the project, it’s a long shot.

Naturally aspirated, supercharged, and turbocharged versions are reportedly being considered, but atmospheric induction is the most likely because it probably will be paired with electric motors. Our source tells us Toyota has been working on an all-wheel-drive GT86 equipped with front in-wheel motors and that this setup could make it into the new BMW-Toyota sports car.

Additionally, we hear the BMW and Toyota products will have significantly different sheetmetal, unlike the 86/FR-S/BRZ. A speculative artist rendering of what the Toyota version could look like is depicted here.

A concept (or concepts) is expected to be shown later this year at the 2013 Tokyo Motor Show. The GT86 took two years to go from concept to production, but with the basic platform already finished, the time to market for this BMW-Toyota sports car could be shorter.